Mr. Big Hates You and Wants to Dance On Your Grave; Anti Feminism and Prince of Swine

I’ve been trying to get in the spirit of the occasion since Big and Carrie’s wedding but something keeps holding me back. I don’t know, I guess it’s the nagging feeling that, perhaps not in Sex and the City 2, but certainly by Sex and the City 3: Collision With Harsh Reality, Big is seeing a hooker who bears a striking resemblance to Carrie Bradshaw, and beating her senseless while screaming, “Take that you golddigging ____! You think I don’t know you’re not in love with me!”.

I believe this has been going on behind closed doors for a long time in the Sex and the City universe (the one in the world, not on screen), but all of those dark episodes never make it to the screen for fear of damage to the franchise.

But still, the evidence for them exists. How could Carrie Bradshaw be in love with Big? He’s an utterly two dimensional character, he doesn’t exist in reality. Troubled millionaires who secretly worship you from afar and are only waiting until you get on the north side of forty to propose (without a pre-nup, of course) exist only in the fantasies of desperate middle aged women who long ago stopped going to the gym in favor of staying at home and narcotizing themselves senseless with such unlikely masturbatory

He has no more reality than the Playboy centerfolds teenage boys religiously relieve themselves to, and honestly, a lot of these women might be better off getting back to the gym and bagging a few of those kids, instead of shall we say, beating themselves to sleep each night with this sort of pathetic pipedream. God knows the pimply faced little bastards could use the release, and where the hell else can they get it in this recession, already being at the bottom of the foodchain with chump change to spend on a date every Saturday night?

And even if Big did exist, how could he love Carrie Bradshaw? Yes, ladies, at least you of the Sex and the City type, your deepest fears are true: you are in fact unlovable. Hard as it is to believe, men, rich or poor, black or white, find it impossible to so much as respect, much less adore, someone who masturbates to our credit cards each night, knocking themselves oblivious, and completely without a clue as to why we dislike them so much. Someone whose values in life don’t extend behind being a good shopper or doing brunch well and gossiping with their idiot friends.

Is there anyone naïve enough in the universe to believe Big retains his charms over Carrie even if his bank account hits zero? As real life New Yorkers know, because it’s happening every day now, women like her disappear as fast as you can say AIG, mortgage securities, or taxpayer funded bailout. The two phenomena are not unrelated and the Sex and the City craze is not as entirely frivolous and harmless 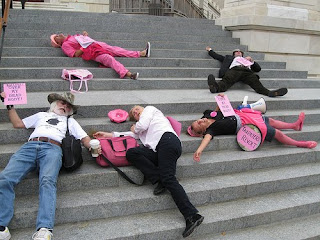 as it seems either. It’s women like this, impressed by nothing but money, that encourage the same sort of male behavior – being an empty suit, willing to do anything for a cheap buck and an even cheaper fuck.

Next up: even gay men hate Sex and the City.

After that: at least 50% of women hate Sex and the City too. And God bless them, all hope is not lost for America and the human race.