Iraq General Reviews Hollywood; Bigelow For President as a Real Feminist; The Hurt Locker - Sex and the City 2 It Isn't

General Ray Odierno, Commander of all US forces in Iraq, cast his Oscar vote for Katherine Bigelow's The Hurt Locker recently on the News Hour with Jim Lehrer. The interview was remarkable in many ways, for what the General did and didn't say, and also sheds light on why Bigelow is such an extraordinary woman, richly deserving of the Oscar, and Prince of Swine's idea of a real feminist.

First, Odierno liked The Hurt Locker, and thought it pretty accurate. That's incredible. Almost universally, modern US soldiers, left and right, nevermind the top General in Iraq, despise the way they're portrayed in Hollywood (i.e., as hapless victims - In the Valley of Elah, Lions for Lambs, The Lucky Ones, if not outright psychopaths, Brian DePalma's Redacted) .

Bigelow's ex-husband, James Cameron, even has US Marines both slaughtering nature loving, harmonious, blue (Iraqis?) for the oil of the future, while at the same time blowing up the natives' towering tree dwelling (did it look like a Trade Center to anyone else?). Cameron's imagination is exceeded only by his audacity in so successfully selling such an anti-American movie as Avatar to Americans (not to mention the rest of the world, only too eager to gobble it up after 8 years of Bush Jr.). Somehow our military is out both butchering innocent natives (rather than failing to stop a civil war they should never have been placed in the middle of) while at the same time those greedy redneck bastards also nuked the global symbol of American capitalism (and, oh yes, they were frying the Green movement too when they blasted that tree)? Busy guys. With herculean understatement Odierno responded, when asked if he liked other Hollywood depictions of the modern military, "Well, not so much."

Now in fact, the worst movie of the lot (DePalma's Redacted in my view), is based on the true story of a small group of US soldiers slaughter of innocent Iraqi civilians. Accepting everything in the film as true, still, the soldiers ask, "Why would you make a movie, about the absolute worst behavior of the 150,000 or so US soldiers in Iraq at the time, and broadcast it to the world, when the vast majority of us are stuck in the middle of a war zone, trying our best to keep all hell from breaking loose - and let me tellya', we're badly outnumbered!".

Along these lines, I must admit, I've never been so embarrassed in my life to be a liberal Democrat, as when MoveOn.org took out its "General Petraeus or General Betray Us" ad at the most crucial juncture of the war, when it was unclear if Iraq would move towards peace and democracy, or descend into full scale civil war and probable genocide for the Sunni. P.S., Mr. Cameron and Move-On, however badly Bush Jr. deserves to go down in history as our worst President ever for getting us into an unnecessary war he was incompetent to lead, General Petraeus and our troops prevented things from being exponentially worse. This country would have had a genocide on its hands and the war would still be going full throttle today, if we'd pulled out when Petraeus' accusers wanted us to. We owe them all an apology and a debt of gratitude we can never repay, for salvaging the situation as well as they did. 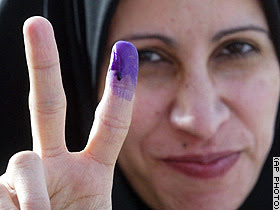 It would be understandable if the Iraqis were less grateful, with 100,000 Iraqi dead, due to the botched planning of American politicians, and the military being the only Americans they can directly take this out on. But on the whole, I've gotta say, most Iraqis like our military a hell of a lot more than we do. It's ironic, because Petraeus' strategy (counterinsurgency) that finally salvaged Iraq and prevented a genocide, is a classic liberal strategy: reach out to your opposition, show restraint in the use of force, kindness and understanding in the face of violence, protect the people even at risk to yourself, and they will come around instead of fighting you.

Though technically a Republican, Petraeus (like Bush Sr. and Teddy Roosevelt), is the sort of Republican deeply suspected by his own party of being a (Princeton) liberal, and would never have been placed in charge of Iraq, if the other Republicans hadn't screwed it up so badly the whole country was about ready to go down the toilet. And if you don't think it could have been more of a mess, you don't know Iraq. This little tiff they've been having for the past 10 years is a tea party compared to what went on there in the 80's (which, no doubt, was the fault of the American military too).

It's ironic that a woman would be the first filmmaker in Hollywood with big enough balls to get anywhere near the war zone, both to film, and summon the psychological courage to crawl inside the soldier's heads, and experience, even if only emotionally, their lives and sufferings. It's even more ironic she's never mentioned as a feminist by women, The Hurt Locker's audience is overwhelmingly male, and none of these women seem to have a clue as to why men love Kathryne Bigelow so much or find her so sexy, mentally and physically (or, on the other hand, why most men loathe Sex and the City 2 so much while at least half the female (and even feminist!) population of the country has gone gaga for the Sex and the City drug and fantasy).

I've got one question in light of all this. Why isn't this woman running for President instead of Hillary? Good God, talk about a real feminist you can believe in. Screw Hollywood, give her the White House.

Visit Prince of Swine at http//www.princeofswine.com.