Q: Now your position is that someone like Gloria Allred is a mockery of a real feminist, or has become some sort of public menace now?

MT: I only know what I see on Entertainment Tonight, but generally when a lawyer even gets on Entertainment Tonight it’s not a good sign. It means they’ve become addicted to fame, power and conflict. From what I understand Gloria Allred actually did socially meaningful work at some point, defending underdogs who’d been actual victims of injustice. I don’t know if that’s true, but if it is, she’s become some sort of mockery of that now. On the other hand, you've got someone like Gloria Steinem, who seems to want to stay out of the spotlight for a long time now - she won't say anything even when it seems she wants to. At the start she called Madonna anti feminist, but then she sort of backed off, as if she didn't want to get in some sort of frivolous media war. Now you can't even get her to say anything bad about Sex and the City, though Sex and the City seems pretty much like the heir to Cosmopolitan - so if there's no difference between the two now, how can anyone take feminism seriously?

Q: You didn't really answer the question, how is Gloria Allred making a mockery of feminism?
MT: She's making it something frivolous, like an episode of Sex and the City or something. When you do that, or you're conspicuous in your silence, like Steinem is, you allow these women to get all the press, most men don't make any distinction between women and feminism, so it looks bad for all feminism. I mean, Allred taking on Tiger Woods’ mistresses as clients? Please. She’s not even alleging that he’s done anything illegal (and he hasn’t – cheating on your wife is not illegal. It might get you soaked in divorce court, but she’s not Woods’ wife lawyer, it’s none of her business). It’s not clear if she’s asking for money from Woods or will do so in the future, but whatever she's up to it's nothing socially useful. It's ambulance chasing, literally, that ambulance shows up at Woods' home and Gloria Allred is not far behind.

Q: All she’s asked for that I can see is a public apology to the mistresses.
MT: The entire episode and all parties are as frivolous as an episode of Sex and the City. Really, what is this about? What’s in it for her? Healing some injustice? Really, these women are as guilty as Woods.
Q: Guilty of what?
MT: Guilty of being intensely annoying and frivolous like Sex and the City, just like all feminism has become. Unfortunately, that's not illegal, and cheating with a married man, not exactly laudatory, but Woods and his mistresses deserve each other legally and morally, and it’s nobody else’s business, except Woods’ wife. So I don’t know if Allred is doing this just for publicity, or she does want money from Woods – whatever it is it’s a mockery of her old image.

Q: Can’t both images be true?
MT: Maybe. Maybe she’s someone like Johnny Cochran, who’ll defend an OJ, but then take the fame and money he got from that, the blood money, and do some decent pro bono work to make up for it.
Q: Bringing flimsy harassment suits for the money, if she’s done that, or associating with I don’t know – cast-offs from the Jerry Springer show in order to get publicity, the OctaMom, these Tiger bimbos, that’s hardly the same as defending a murderer, getting fame and money out of it -
MT: Yeah, that’s true. Honestly, I don’t know that much about Gloria Allred and I don’t want to know. I see someone like that coming and I cross to the other side of the street, she’s just bad news for any guy in the country. If that's what feminism has become, then feminism has become bad news. You get an email from her, and you don’t even have to open it to know you’re gonna have a bad day, maybe a bad year. She’s a one woman war zone and a destructive force as far as I’m concerned, promotes fear and distrust between the sexes. 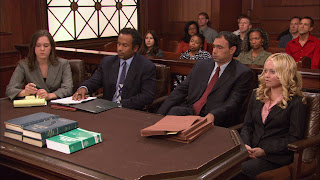 Q: How is she any different from the character you play or the woman you glorify in Prince of Swine?
MT: Not even close. The Julie character considers herself a feminist, and may have been like her when she was young - she genuinely believes she's fighting injustice, and she is in this case. This is an actual case of harassment in Prince of Swine, which are very rare, usually it's about money or power, and the charges are trumped up. Here, this actress cries wolf, and no one believes her because feminism has become so discredited and is looked at with such suspicion and dislike, because everybody is always crying wolf falsely these days. But Julie will probably stop being a lawyer or change to some other form of law, 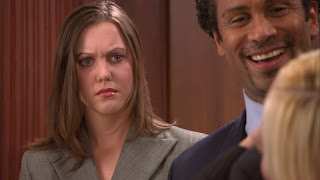 now that she no longer believes in it. Julie is very much changed by the lawsuit. She wants to do something meaningful with her life and help other people. Maybe she'll become a Kathryn Bigelow type feminist, a real feminist, she's of that stock (though I have no idea if Kathryn Bigelow would even call herself a feminist). Witt is just taking the case because he's in love with her, he doesn't really believe in it, he just thinks Farber's more of a pimp than Kelly is a whore. Welcome to the modern American legal system. Hard to find innocent characters or a cause you believe in.
Q: So you just go through life not believing in anything?
MT: I hugely believe in what I call the Democracy of Aristocracy (http://princeofswine.blogspot.com/2010/03/revolution-will-be-televised.html), something that turns on the nexus of law and economics, I believe it's the only thing that can bring us safely through this economic crisis to a better tomorrow (http://princeofswine.blogspot.com/2010/03/hollywood-makes-first-contact-with-real.html). I hugely believe in reform of the law of war in this country, and the United Nations, I've committed my life to these causes. I was horrified by Iraq, every time an American soldier dies overseas I feel guilty, like it's an unnecessary tragedy I can prevent. I'll fight to my last dieing breath to change that (http://princeofswine.blogspot.com/2010/03/iraq-general-reviews-hollywood.html). These are the most important legal and revolutionary fronts in our time. They're just not something you can make any money at like Allred is doing, by sueing people or embarrassing them in public. I'll make my money and fame honestly, as an artist, and then I'll use that fame to change the law to help people, without hurting anyone, on the contrary, they'll be protected, empowered, and liberated, that's what I'm about, and that's what Prince of Swine is about.